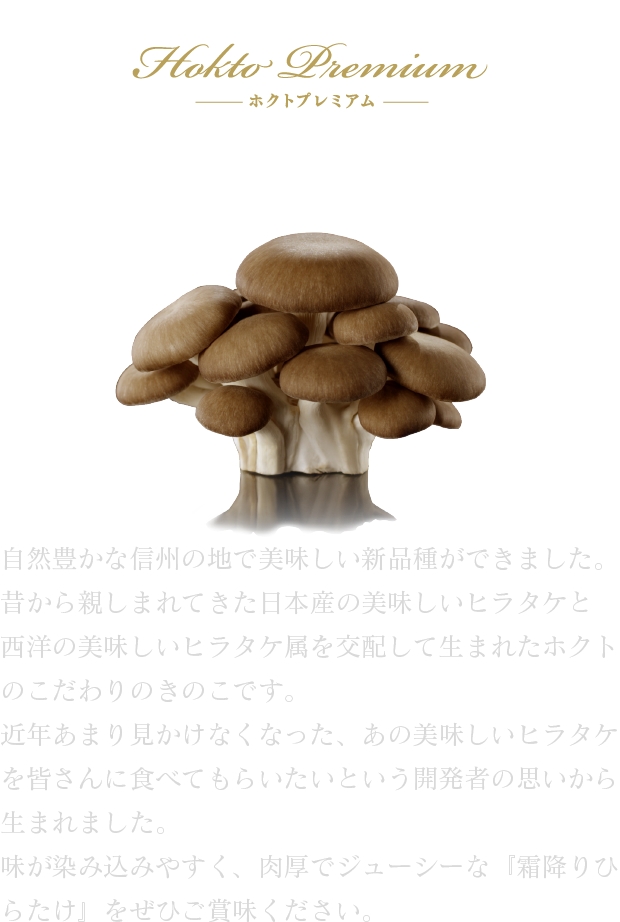 Shimofuri hiratake is a new type of mushroom produced through the crossbreeding of European hiratake with Japanese hiratake, which has been long admired by many Japanese, and also appeared in the Japanese classic “Konjaku Monogatari (Anthology of Tales from the Past)”.

Origin of the name

“Shimofuri” means “marbling” in Japanese.
The name “shimofuri hiratake” originates from the beautiful marbled pattern found on the surface of the fleshy mushroom caps.

Shimofuri hiratake is a mushroom featuring an appealing chewy texture, delicious juiciness, and convenience of use (by simply breaking it apart with your hands).
Also possessing presence as a main ingredient, it acts to powerfully stimulate the creativity of those who enjoy cooking.

Shimofuri hiratake allow you to enjoy the tender texture of mushrooms in dishes ranging from “pan-fried seasoned shimofuri hiratake” to deep-fried foods, stir-fries, and soups.
Flavors are easily absorbed into mushrooms, making shimofuri hiratake a recommended main ingredient for boiled or stewed dishes.
TThey also help with beauty and health, thanks to an abundance of beauty vitamins (B vitamins) and dietary fiber.
Net 100g per pack.